Continuing my report of games I played I Cold Wars 2012, I present my third entrance into a DBA tournament, the first that was for 25mm, and the debut of my wooden Early Armenian army in any game. (Which is another way of saying I did not practice playing DBA in 25mm or using that particular army list at all before entering the Grand Melee.)

My other Cold Wars reports are here: one, two, and three.

First off, it was great actually meeting a lot of the people behind the names of the posts I read on the DBA forum on Yahoo and on Fanaticus.

My first game was against Ron G. (his Fanaticus handle) and his (I believe) Seleucid army. The figures were nicely painted and based and Ron was a real pleasure to game with. In fact, he gave some advice for how to play my Armenian army better (but only after he had kicked my butt). But, I am getting ahead of myself. Game one starts with the Seleucids invading my beloved Armenia ... 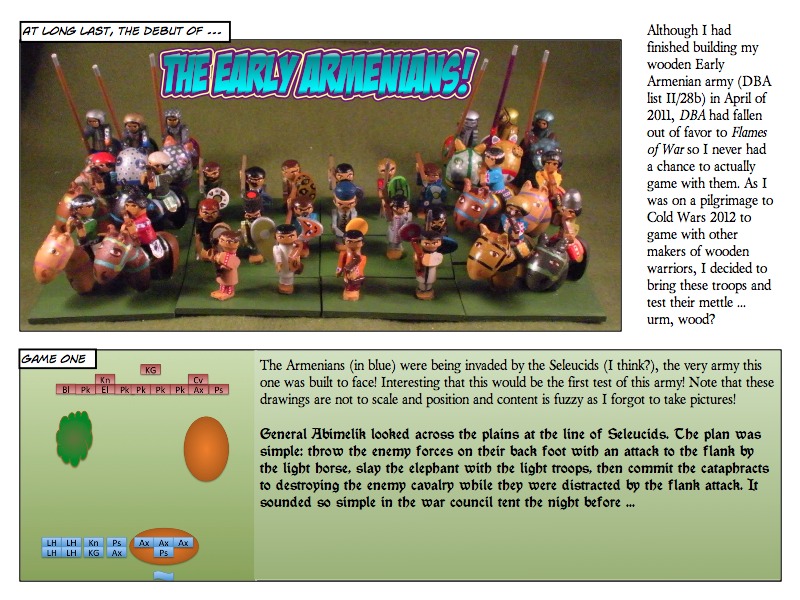 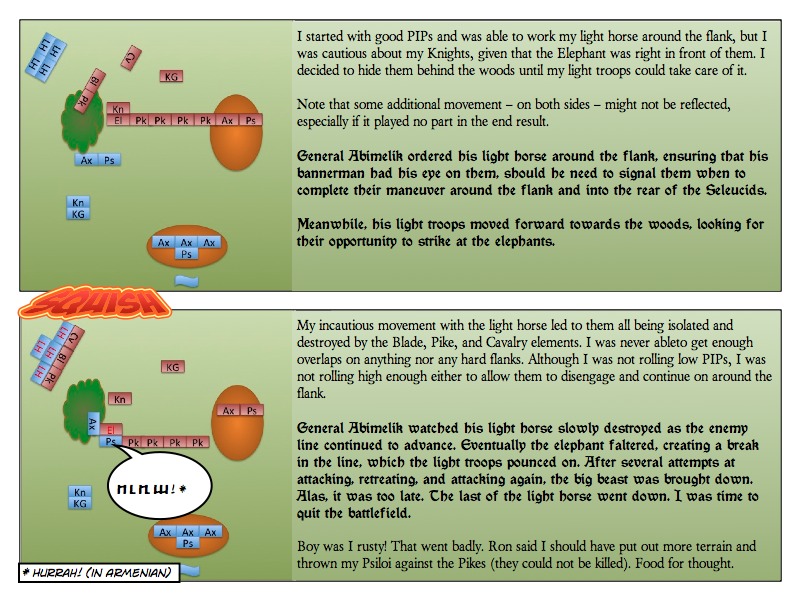 So, a 1-4 loss because I (yet again) over-extended my light horse. I did finally kill that bloody elephant, which was my primary goal, so it would not rampage through my army.

Next up was a game against a Greek Hoplite army consisting of ten Spear elements, and two Psiloi elements. I've played a few hoplite battles and always found that the battles against the Thracians and Scythians (or even the Thessalians with their Light Horse elements) were a tough row to hoe. 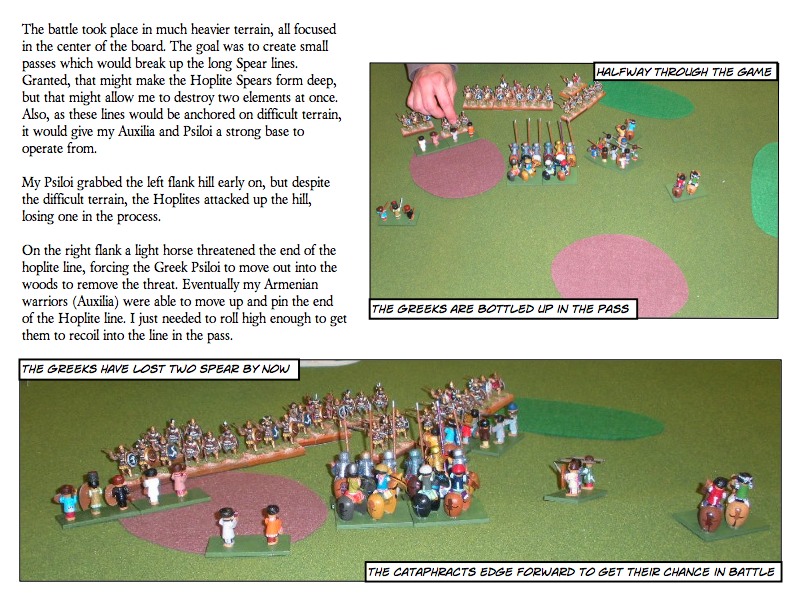 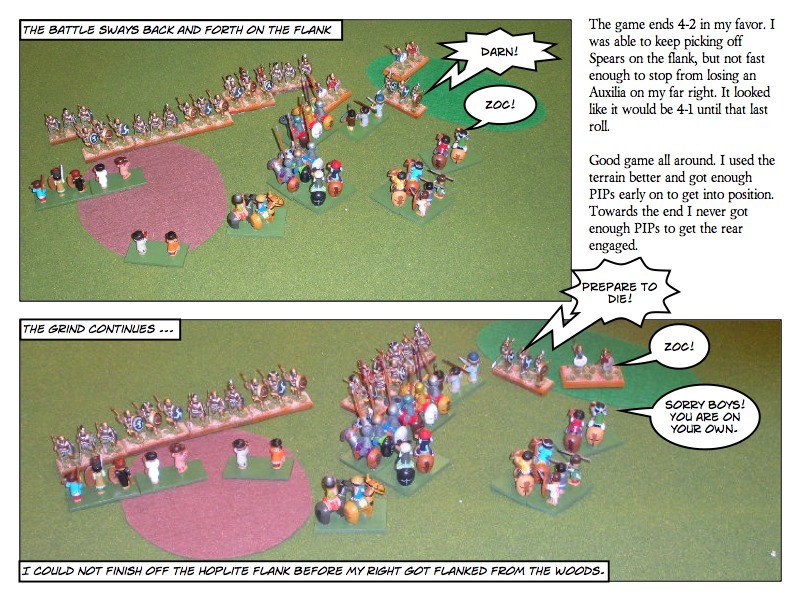 Finally a win at 4-2! I made comment to my opponent (who unfortunately, I lost his name) that I thought that this was a tough match-up and his comment was that he had won two previous tournaments with that army. Well cool!

Game three was against Ted (I hope I got his name right) and his Low Countries late medieval army, consisting of seven Knights and five bows. Again, Armenia was being invaded ... 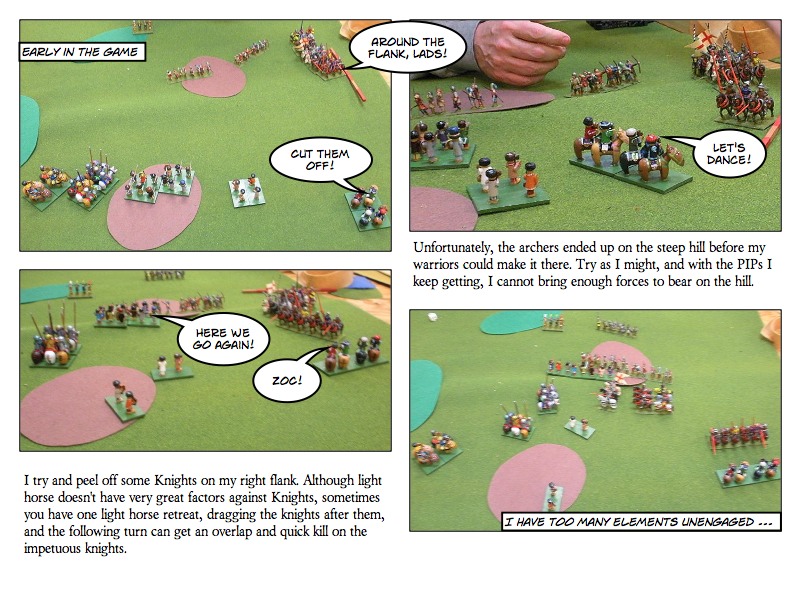 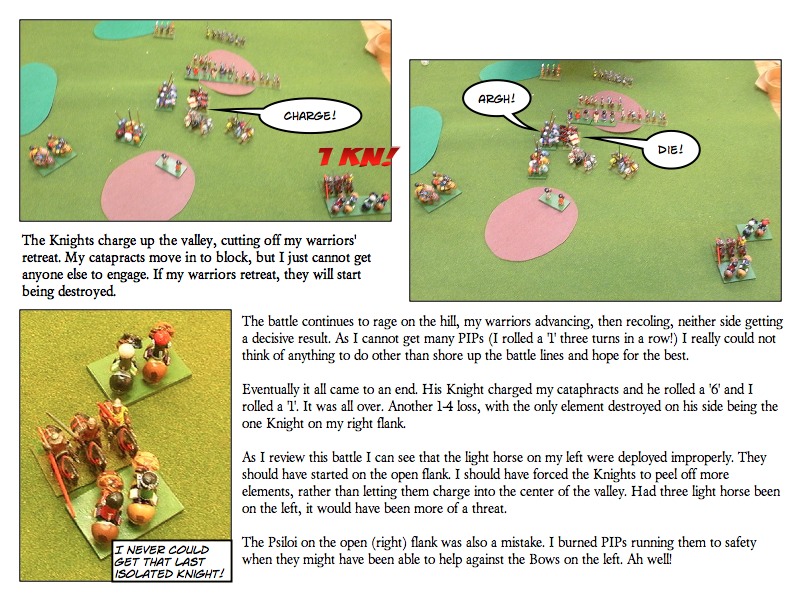 Another 1-4 loss! I hate saying that it was because I got a bad string of PIP rolls (which is true); I really felt that somehow I could have changed my deployment in some way and done better, but my opponent said he did not think so.

It was an enjoyable tournament, with really nice opponents, and it taught me a lot. Not necessarily how to fight with the Armenians any better, but more that if you really want to do well in a tournament, whether DBA or Flames of War or anything else, you really need to practice. For DBA it is very much about understanding the relationships between elements (what beats what) and being familiar with the combinations certain armies can bring to the table. Hmmm. Sounds the same as Flames of War, come to think of it.

One final note: something I had always wondered about was how the "general wargaming population" (whatever that is) might react to my wooden figures, especially for something as serious as a tournament. The answer is, the reaction was pretty good. At worst I got a grin, but no comment whatsoever. However, I got a lot of positive comments, before, during, and after the games including from passers by. The most surprising comment was "where did you buy them?" Of course one common response was "it must have taken a long time to make them." As indicated on my Wooden Warriors blog, making the Armenian army was originally part of a "12 elements in 12 days" experiment. Although I did not make that goal for a number of reasons, that goal was for making, painting, and basing. And I was not that far off. So no, they do not take that long unless you want them to.
Posted by Dale at 12:39 PM